Skip to content
If we want a natural future we have to get off the chemical path! Learn How!
Quick Links

December 7th 2013, No Spray was given mushroom logs to “try out”. I have always loved mushrooms. The taste, the texture and everything I read about them. There is something about mushrooms that have always intrigued me and my stomach. Growing up, I always had them as a topping on pizza as well as enjoyed fresh ones on salad and sauteed ones on steak and burgers. Always delicious and always making me crave for more. So when our friend told us that he had to leave the islands and was wondering if we would watch over some mushroom logs, we couldn’t have been more happier and curious.

College only taught me about mushrooms. How they grew and reproduced. How some effect crops and others attach to the ends of roots aiding in nutrient uptake. I never had a course on how to grow mushrooms so we became excited to learn and broaden our perspective on another yummy addition to grow in our garden.

We were given a truck load of what looked to be like cut logs. They were suppose to be two different types: shiitake and pearl oysters. To the best of our knowledge we kept them separated. But who knows! They were dropped off late and this is our first time ever trying to grow mushrooms!

Our friend did do us the BIGGEST favor ever when he said that they were inoculated over a year ago. He trimmed some alder trees and drilled small holes all over. He then hammered in some spores that he purchased online and covered them with bees wax. After being covered they were set outside in the shade in small groups of four to eight logs set in a “Lincoln log” fashion. These stayed this way for about one year.

During that year, the spores have had time to start entering into the logs cell walls. After all, mushrooms are decomposers. They feed off of the dying and decaying particles. They were sitting for just about one year when he brought them over to us! That should have given the spores, in the log, enough time to begin to consume the nutrients within and want to produce the fruiting body or the mushroom!

We stacked the logs for the night and were eager to do some research and learn what to do next! 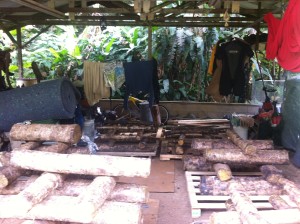 CLICK HERE to see more pictures of our mushrooms growing, harvesting and cooking!

Please go to the Instagram Feed settings page to create a feed.